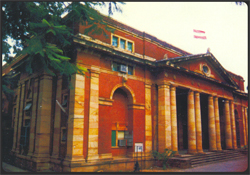 The Nagpur University renamed in the year 2005 as “Rashtrasant Tukadoji Maharaj Nagpur University” was established on 4th August, 1923 with six affiliated colleges and 927 students. During 1947, the number of students increased to about 9000 accompanied by the improvement and diversification of curricula and expansion in the range of subjects. The expansion of library and sports facilities occurred during these years for the intellectual and physical well being of the students. It was in 1958 that some new Departments in Arts and Social Science faculties were opened; the major expansion, however, came in 1963 when several science and other teaching Departments were started. The Departments were shifted to spacious buildings in the main campus in 1972-73. In later years, several career oriented courses have been started viz., Business Management, Fine Arts, Mass Communication, Library Science, Physical Education, etc. During ninety years of its existence, the University has progressed satisfactorily and doing well in the midst of constraints of different sorts. This has been possible because of futuristic vision about higher education of the personalities who adored the chair of Vice-Chancellor of this University. Their determination and dedication helped a lot in progress of this University.